I used to post my book reviews on another blog (now defunct) but I’ve decided to start publishing them here. In light of the fact that I’m a few chapters from the end of book three of this trilogy, I’m posting a past review I did of Annihilation – book one of the Southern Reach Trilogy. Enjoy!

Here’s one of those rare instances where I could probably sum up a book report in two words. And those two words are: MIND BLOWN.

Jeff Vandermeer’s Annihilation is unlike any book I’ve ever read, which can be confusing and slightly frustrating, but it’s also exhilarating (in a book-nerd sort of way).

Structurally, the story was told as any other, from the start of events to the finish, so the narrative was easy to follow. But where it starts to get wonky is the fact that none of the characters in the book have names. Yeah. Weird, right?

They are instead identified only by their positions on this mysterious expedition; the surveyor, the anthropologist, the psychologist, and our narrator – the biologist.

Something else I loved was that all four of these characters were women. There was some major chick power in the story!

It’s hard to assign a genre to this one but, if I had to, I’d say futuristic dystopian, without any real sci-fi elements. Also a bit of horror and thriller. And adventure. Okay, fine. This one defies any labeling. I read another review that described it as “Lovecraftian” and that sums it up nicely.

So without giving away too much (almost impossible considering how the entire story is cloaked in mystery) I can say that these four women are chosen to explore Area X, a vaguely described section of the southern United States where there was an “event” some years back after which time it was abandoned and reclaimed by nature. The Southern Reach is a government agency tasked with figuring out what the hell is with this place, and so they send in group after group, with no luck at all. Not just no luck, BAD luck. Pretty much everyone is messed up by entering Area X in different, screwy ways.

Vandermeer’s writing style is simple and concise, and the story only flashed back a few times to the biologist’s home life before the expedition, so apart from that you’re trapped in Area X with the protagonist the whole time, wondering WTF along with her. There are some awesome eerie, suspenseful moments, and one amazing feat on the part of the author in which he describes something that is essentially indescribable. You’ll have to read it to see what I mean by that.

All in all I was hooked by the unknown in this book, and couldn’t put it down because of the intense need to know more. Which is pretty much the motivation of the biologist for volunteering to go to Area X in the first place.

I believe that you learn something new from every book you read, whether it’s A Tale of Two Cities or Twilight. You just have to pay attention.

Things I Learned About in Annihilation:

New Words I Learned In Annihilation:

Eukaryotic – Used in the book to describe a mossy fungusy thing. A sciency word that a biologist most certainly would use. 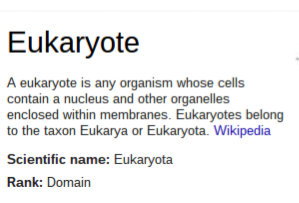 From the book: “…what would have looked to the layperson like rich green fernlike moss but in fact was probably a type of fungi or other eukaryotic organism.”

Crenellations: This word was used to describe parts of a lighthouse that is visited in the story.

From the book: “I could see crenellations that created lines of sight for rifles.”

Bulwark: This word was used to describe moss on the seashore.

From the book: “They, clinging to the soil, stopped it from eroding and helped

bulwark the dunes and the sea oats that came next.”

I’ll give Annihilation a 3.5. It was thoroughly enjoyable, incredibly suspenseful and spooky, and very addictive. It lost a point for me when it failed to answer some major questions that I had. I suppose that’s why it’s a trilogy though! Also, a half point is lost for making the strong female lead’s motivation largely about a man.

Thank you for visiting Quirk Communications. My name is Angie and I’m a digital communications and social media specialist in Ottawa, Canada. I love helping people tap into the potential of the internet and the various social media platforms to help them succeed in their businesses.

My clients, partners, and friends you should check out!